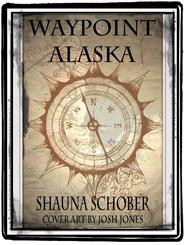 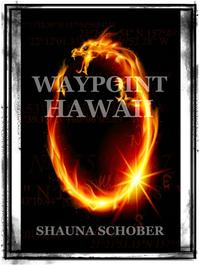 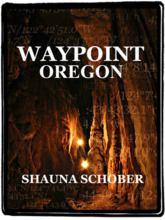 Waypoint: Oregon is the first book in the Waypoint Book Series. On the last day of school, while making plans for a lazy summer vacation, Ben finds himself trapped in a sinister high-tech scavenger hunt, where he is forced to face all of his fears, both physical and emotional in order to survive and save his family.

Nine-year-old Ben Connor thinks he has hit the jackpot. Hidden within a box of cereal are the exact longitude and latitude coordinates for a geocache that holds ten-thousand dollars. (Geocaching is just like Pokemon Go, but with an actual treasure, not just virtual creatures). Ben grabs a G.P.S. unit and makes a deal with his aunt to split the money if she agrees to be his taxi. But could this treasure hunt be too good to be true? And did he really read those instructions correctly? If not, why is he being lured to all these places and who is behind this dangerous scavenger hunt?

Using G.P.S. navigation, Ben and his adventurous aunt locate clues using longitude and latitude coordinates. What is supposed to be a short, safe trip, ends up being a dangerous, exhausting, and hilarious adventure exploring various landmarks throughout Oregon. Through struggles and challenges Ben is forced to confront some of his biggest fears, both physical and emotional. He is helped along the way by a mysterious figure, which only he can see, and although he wants to trust, he finds it difficult as his life is put on the line time and time again. As if dealing with their problems wasn't bad enough, the pair realizes they're being followed. They want to give up, but are forced to continue in order to save themselves and their family.

The Waypoint Book Series takes the reader on an adventure following Ben Connor who finds himself on a dangerous, high-tech scavenger hunt taking place in different states around the United States. This geocaching scavenger hunt is like Pokemon Go-but instead of capturing virtual Pokemon-Ben is after a treasure -a huge, unbelievable, epic treasure, which could forever change the lives of everyone he knows- and the lives of an entire culture that he doesn't know. Over and over in the series Ben is forced to come to terms with his own insecurities; physically, emotionally, and spiritually. He has to prove that he is capable of completing and thriving in all the dangerous challenges that are laid out in front of him, and this isn't something he can just give up on, he can't just turn off his phone and have it disappear-not if he ever wants to see his family again.

In the second book of the Waypoint Book Series, join Ben, Megan, and Aunt Lacey as they explore Alaska. Once again finding themselves on an eerie treasure hunt-created by a dead man-the group finds themselves thrust into a world of bears, avalanches, sunken ships, and an unbelievable treasure. But with a huge treasure comes a huge threat, and Ben quickly realizes he must do everything in his power to protect his little sister and aunt. But how can he protect them against a group of dangerous treasure hunters, who believe he holds the key to a shipwreck's two-million dollar lost treasure? The villains will stop at nothing, and when they realize that the actual treasure is the deed to the land where the world's richest gold mine is hidden, they will do anything to get their hands on it, including killing some innocent kids and their annoying aunt. Ben has to fight like he never has before, using skills and mind games that in the past he never thought he would have control over. He has to beckon the mysterious, ghostly, shape shifting creature known as The Keeper. He learns how to embrace, rather than fear, The Keeper's presence in order to combat the bizarre challenges laid out before him and the evil thugs who threaten to destroy his world.

In Waypoint: Alaska the chase is on, and this time, someone isn't coming home.​​​

Waypoint: Hawaii is the third book in the Waypoint Book Series. The Waypoint Book Series brings readers along on an epic geocaching adventure. Geocaching is just like Pokemon Go, but instead of capturing virtual Pokemon, geocaching takes you to places where there is an actual treasure, known as a geocache. In the series we tag along with Ben, Megan, and their adventurous Aunt Lacey, who have been trapped in a sinister high tech scavenger hunt. The story began in Oregon, where Ben and Aunt Lacey discovered an amazing treasure, which sent them on to explore Alaska in Book 2. In Book 3, Waypoint: Hawaii, we begin with the group being held hostage by treasure hunters who will stop at nothing to get their hands on the ultimate treasure-the deed to the land where the world's largest gold mine is located. This ultimate treasure hunt was designed by the now deceased "Cache Master," a man who found out about the value of his family's land shortly before he died. He knew that if the land fell into the wrong hands an entire culture of Native Alaskans would lose their way of life. In an effort to avoid that fate he designed a treasure hunt filled with puzzles, feats of strength, and crazy challenges in deadly locations. This was a treasure hunt to weed out the weak, a treasure hunt that would expel those too confident, too arrogant, and too greedy. This treasure hunt was designed to find the ultimate person, who had strength and humility. The Cache Master didn't know one thing when he was designing this test though- he didn't know that the person who would make it the farthest, the one who would prove themselves over and over again was only 10 years old.

In Hawaii the trio island hop searching for the final geocache in the Cache Master’s game. Between a string of bad luck and not being able to escape an eerie Hawaiian mythological legend, they’ll find out why ‘Aloha’ means hello and goodbye.